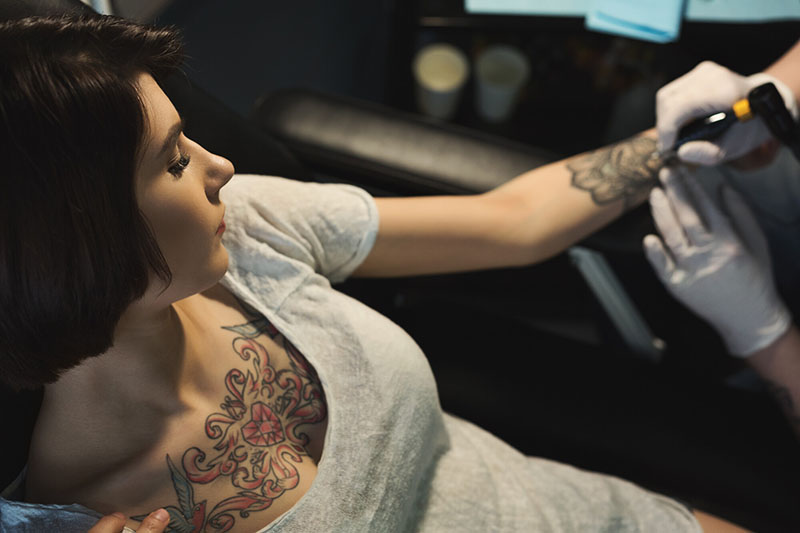 Becoming famous can be as simple as producing a viral tweet or eating corn on the cob with enthusiasm. Tattoo artists aren’t interested in such fickle fame, however. They are responsible for creating art on the canvas of the human body and can only hope to gain recognition for their inherently ephemeral masterpieces.

Very few tattoo artists become household names, but there are always exceptions. Some of the best tattoo artists in the world are pioneers who have changed the art form in new and exciting ways. Others earned their celebrity in other ways, from reality TV competitions to social media success.

Read on to find out what made these intrepid inkers some of the greatest tattoo artists in history.

With tattoo magazines and social media in play, there’s constantly a new “flavor of the week” in the tattoo art world. That’s why it’s so impressive when an artist can remain a household name after death. George Burchett was a European tattoo artist the world still calls “The King of Tattooists.”

Burchett’s career began in earnest at twelve years old, when he began etching images into his classmates’ skin, getting him expelled. He wouldn’t earn legitimate training until he enlisted in the Royal Navy in 1889. He took inspiration from the native tattoos he saw while traveling the world.

He returned to England in 1896, where he tattooed people in the back room of his cobbler’s shop. Over time, he gained enough acclaim to begin tattooing full-time. He was one of the first artists to use an electric tattoo machine and topical anesthetic.

Once he established his permanent shop, he began to attract the attention of more elite clientele, who previously may have traveled to Japan to receive ink from the masters. Famously, he’s known for tattooing King Frederick IX of Denmark, King Alfonso XIII of Spain, and King George V. He is most famous for tattooing the sideshow performer The Great Omi.

Burchett would eventually pioneer the field of cosmetic tattooing, including the earliest versions of permanent makeup and eyebrows. He would continue tattooing until he died in 1953, at 80 years old. All in all, his professional career would span fifty years.

Tattooing is a sacred aspect of many cultures, and Cambodia is no exception. The difference is that Cambodia experienced a massive genocide at the hands of the Khmer Rouge.

The genocide eliminated 90% of the Khmer population. So many Khmer tattoo artists were lost that many feared the sacred art would vanish forever.

The mystical art of Cambodian tattooing goes back to the eleventh century, and Khmer tattoos are considered powerful. Say Teven is best known for reviving these ancient traditions so they can live on, preserving a vulnerable culture after immense loss. He is teaching the art to others to keep the tradition alive for another generation.

As a tattooer, Say Teven still uses traditional bamboo needles, and his subjects must leave offerings at a shrine during the process. He recites spells and wields holy water and herbs. His dedication to this tradition is admirable, which makes him a culturally significant celebrity artist.

Sometimes a tattoo artist is famous in their own right. Sometimes their ink is famous because it’s on the skin of a celebrity, and fans all over the world have poured over its meaning. Celebrity artist Keith “Bang Bang” McCurdy is one of the best tattoo artists currently working in the industry, and the rich and famous seem to agree.

You’ve probably seen some of Bang Bang’s work without even realizing it. He’s the artist behind Cara Delevingne’s famous lion and Rihanna’s iconic henna-inspired hand tattoo. He began tattooing celebrities when he was only nineteen and has remained in demand through his thirties.

Initially, McCurdy planned to study graphic design in college but couldn’t enroll after getting expelled from high school for cheating on an examination. Instead, he acquired his first tattoo kit and discovered a new life path. He ended up dropping out of school to apprentice in a local shop.

His big break came after he moved to New York, where he found work at a shop on the lower east side. That’s where he met and tattooed Rihanna for the first time when she was only eighteen. From there, his career exploded, officially making him an artist to the stars.

Bang Bang insists his success is due to his availability. He’ll drop anything and fly the world in service of one of his A-list clients.

Kat Von D (or Katherine Von Drachenberg) is a household name, even among those who don’t know much about tattooing. She began her career at sixteen after dropping out of high school to pursue a tattoo apprenticeship. Ultimately, she landed at True Tattoo, where her journey toward notoriety began.

Kat appeared on the reality television show Miami Ink, which put her style, work, and personality on display for the world to see. Though she left the show, she had become so popular that the network offered her a spin-off program called LA Ink about her new shop in California. These opportunities would allow her to publish multiple books, start a tattoo convention, create a cosmetics line, open an art gallery, and act in several films.

She has tattooed many celebrities since she began her rise to fame and briefly held a world record for “most tattoos given in 24 hours.” Though she has become a multi-hyphenate celebrity, she continues tattooing today.

You’ve seen Don Ed Hardy’s tattoos, though you may not have seen them on your skin. His east-meets-west style is so iconic that it appears on apparel the world over. Hardy trained as a fine artist and simultaneously completed his tattoo apprenticeship and a B.F.A. degree in printmaking.

Before he began printing clothing, Hardy printed books. Though he worked at Tattoo City in San Franciso, he has always split his time between tattooing and traditional media. The Ed Hardy brand started in 2004 after Hardy had made strides in the traditional and alternative art worlds.

Inspiration for his tattoos comes from Asian art traditions. He has immersed himself in the ukiyoe culture for over two decades. He married his interest in the American art style with his immersion in Japanese technique to create a unique aesthetic broadly identifiable as his own.

The key to Hardy’s success is versatility and dedication. His unique style is due to years of work and study and a willingness to transcend the art form.

Mark Mahoney is a Hollywood legend and perhaps the most influential artist to grace the Sunset Strip. He was once known for his “outlaw” style, daring to tattoo during the 1962 hepatitis ban in Boston. Since then, he has become an artist to the stars (or anyone who can wait six months, as demand is high even among the general public).

His style is iconic. He is a single-needle artist and works only in black and gray ink. Additionally, celebrity clients have raved about Mahoney’s friendly personality and conversation skills, some suggesting they book appointments to catch up with the charming artist. He is equally comfortable with millionaires and working-class fans, which adds to his popularity.

Though he’s tattooed Lady Gaga and Adele, Mahoney has dedicated himself to best practices and his challenging, old-school, fine-line style. His work is so technically flawless many people don’t notice the sheer difficulty level. It’s a combination of technique and star quality that makes Mark Mahoney one of the most famous tattoo artists working today.

Will You Join the Ranks of the Best Tattoo Artists?

The world’s best tattoo artists may have different stories, but they all share one thing in common. They all began as students and apprentices and rose through the ranks through hard work and passion. If you work hard, practice, and take opportunities as they come, yours might be the next name on this list.

Your career begins at Florida Tattoo Academy. Our high professional standards ensure our graduates are ready to open their own businesses, work in competitive shops, and see their work featured in tattoo magazines. Schedule a studio tour to take the first step toward making a mark on the world.